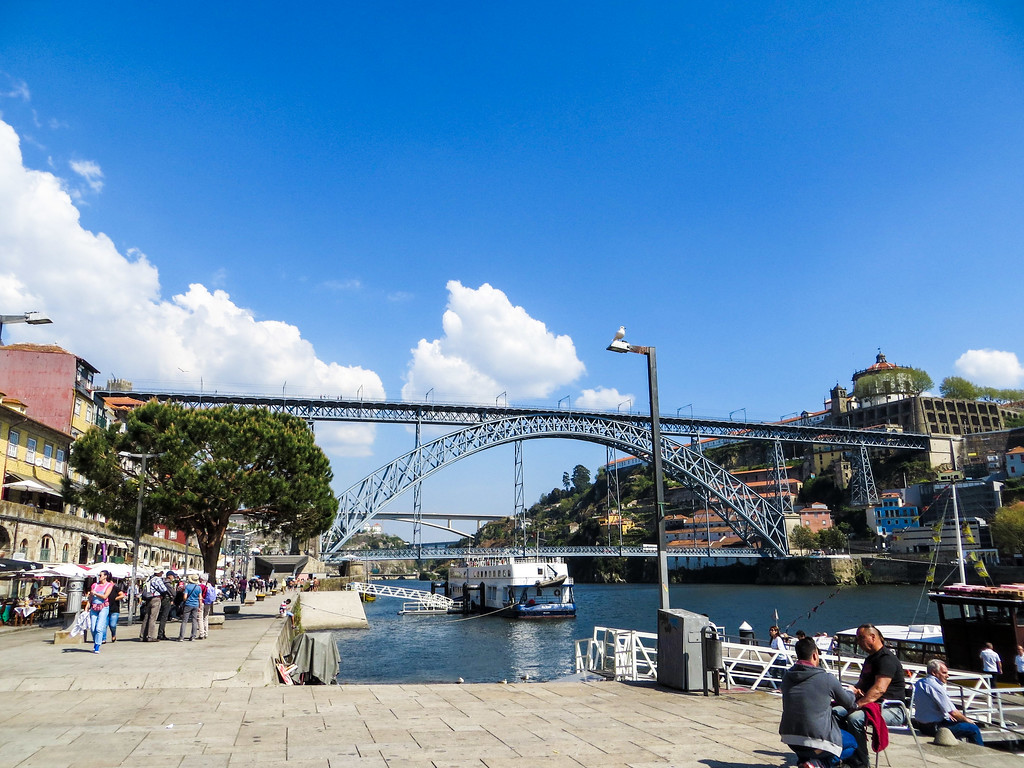 Sightseeing Porto Will Live Forever in My Memories.

Looking back in time, I realized that I discovered so many cool things to do in Porto Portugal, but I was definitely in a foggy and funky headspace when I arrived there for the very first time!

As I walked out of the Campanhã station, still groggy from the 2 and a half hour train from Lisbon, it hit me that I didn’t know much about Porto.

I researched Lisbon. Watched videos about Lisbon. Talked to other travelers about Lisbon. But as for Porto? I knew less than nothing. Well, I knew it was Portugal’s second largest city, in the north of the country, and more industrial than the country’s capital city. I also knew I wanted to sample port wine, because it was, yummy, delicious.

Indeed, I drank a lot of port at Taylor’s – which is technically located across the river in Vila Nova de Gaia. And Porto did feel more raw than Lisbon with fewer sun-seeking Easter tourists roaming its narrow streets.

But, at the end of the day, Porto surprised me and made me realize what it means to be a solo traveler in the sense that solo travel isn’t always perfectly comfortable, even for the most confident of individuals. 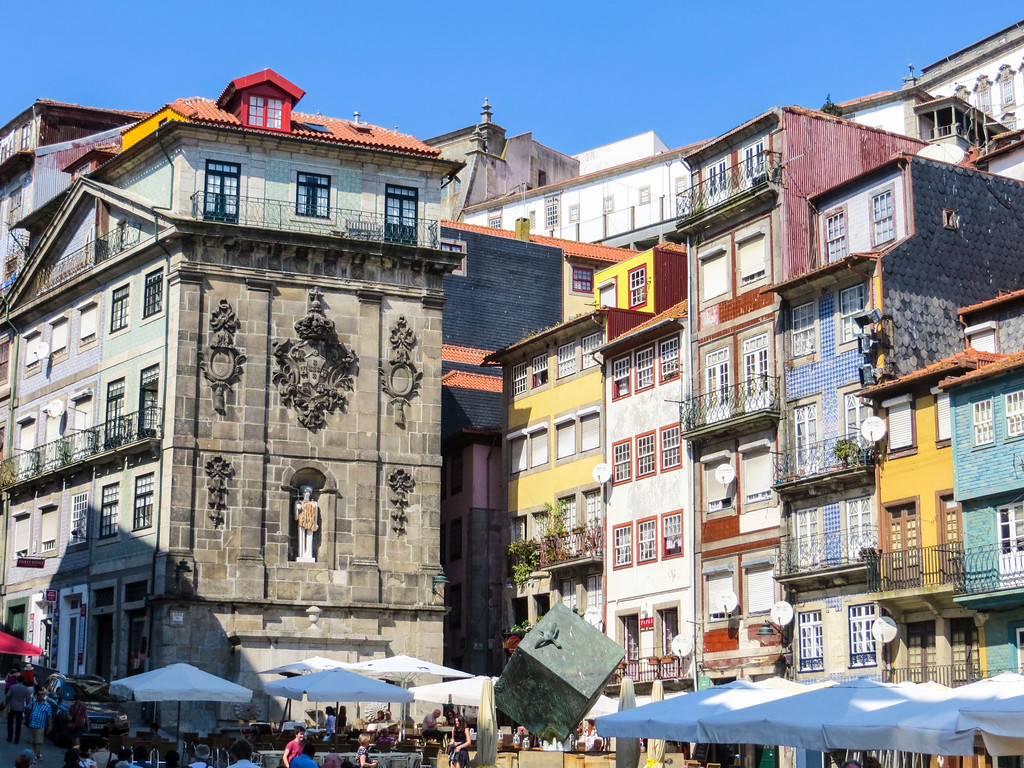 What Did I Love about Porto aka “The Second City of Portugal?”

I loved many things about my trip to Porto.

For example, I spent a solid hour or so lounging at the waterfront near Douro River. Listening to pigeons’ footsteps and laughter from tourists relaxed me.

Furthermore, Porto had fewer crowds than Lisbon, and it was simple for me to blend in with the locals. Slipping under the radar allowed me to truly think about my life without distraction.

Finally, the historical beauty seeping into the city’s streets and buildings was second to none. Why? To summarize, Porto is the embodiment of medieval Europe without the spiffy commercialized zones, touts, and big tourists buses. Unlike Lisbon, which was flattened by an earthquake in the 1700s, Portugal’s second city remains much as it did for hundreds of years.

Porto has a lot for visitors to love. Undeniably.

What Didn’t I Like About Porto aka “The Second City of Portugal?”

However, we also have the flip side of things to any trip. Time for my classic dose of honesty.

Argh, I had such bad luck with my hostel. I love meeting people on my travels. It’s one of the best parts of exploring the world without a companion in tow.

No such luck in Porto, my friends! School groups consumed my accommodation – which was especially lame for a teacher hoping to escape crazy kids for ten days – and I even refused to eat at the dinner at paid for because only kids and teachers attended it. Luckily I met some wonderful people on my walking tour the following day.

However, I’m proud to say I’m more confident as a solo traveler than I was in Porto. I realize it’s okay to enjoy your own company and to eat alone, and now bow down to loneliness. 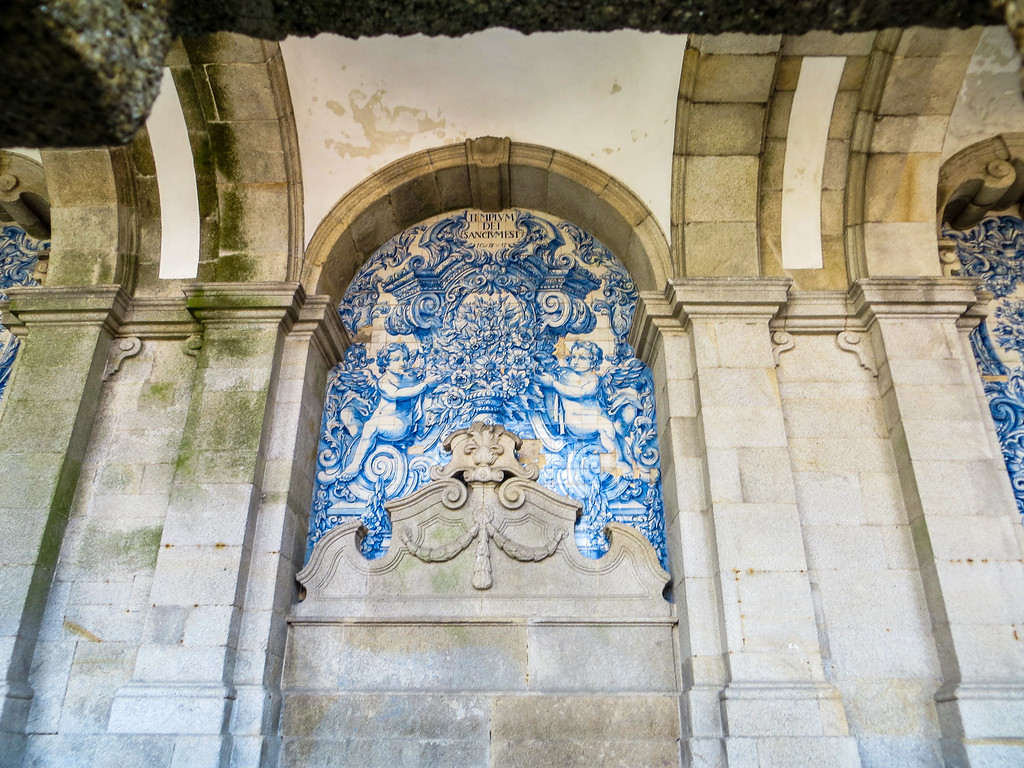 The Second City of Portugal and Lovely Tiles

You guys, these delicately painted blue tiles were everywhere in this city. Inside buildings, on the outside of buildings, in small shrines. I lost count of how many pictures I snapped of these exquisite pieces.

On my walking tour, the guide explained Portugal’s complex history via the scenes on Sao Bento’s walls. I never saw such an artistic train station in my life!

My trip to Porto taught that even small things, like tiles on the walls, add vibrancy and life to a place. Never leave a stone unturned on your solo travels. You’ll feel surprised at what you discover.

Although Porto is “the second city of Portugal” it’s just as artistically significant as the capital Lisbon! 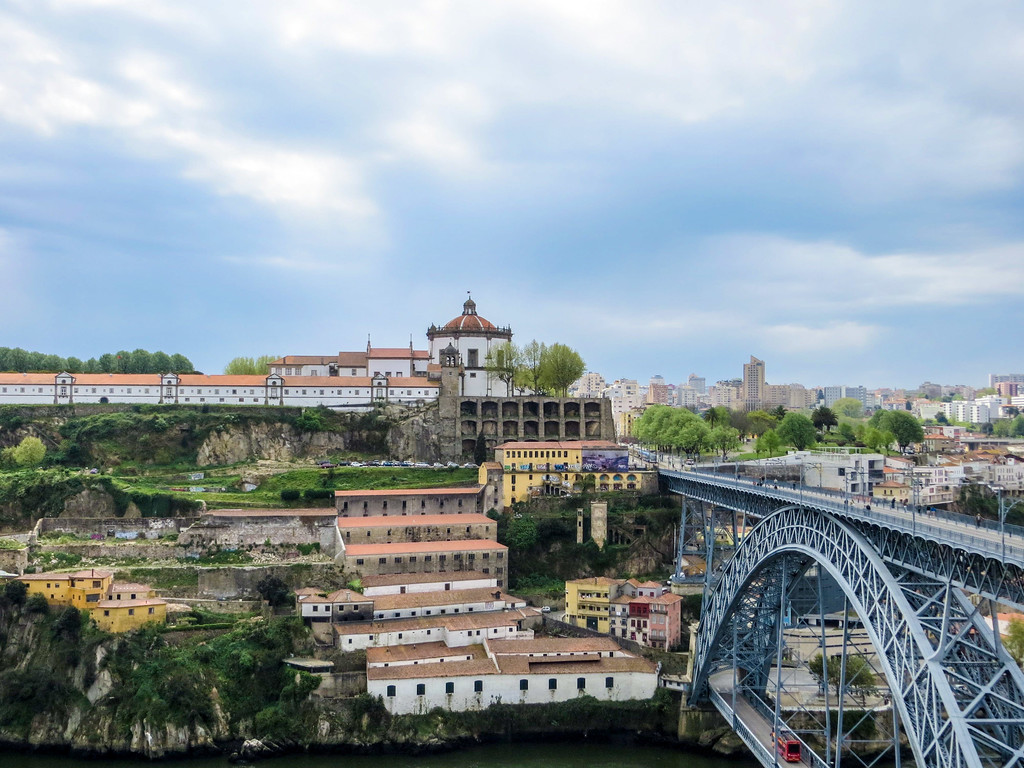 Porto has a delightful number of bridges.

Now I take pictures of bridges whenever I can. Prior to my trip to Porto, I thought bridges were just logical structures to connect traffic, and never quite realized that they are spectacular works of art and engineering in and of themselves.

Porto has two famous bridges. First is the Dom Luis Bridge which you see at the waterfront. Secondly, the Maria Pia Bridge connects Porto and Vila Nova de Gaia. In the entire city, I would say the waterfront draws the most tourists, but it still felt less commercial than other popular European destinations. What’s so cool about this bridge? Gustave Eiffel was one of the architects.

Go see the bridges in the second city of Portugal. 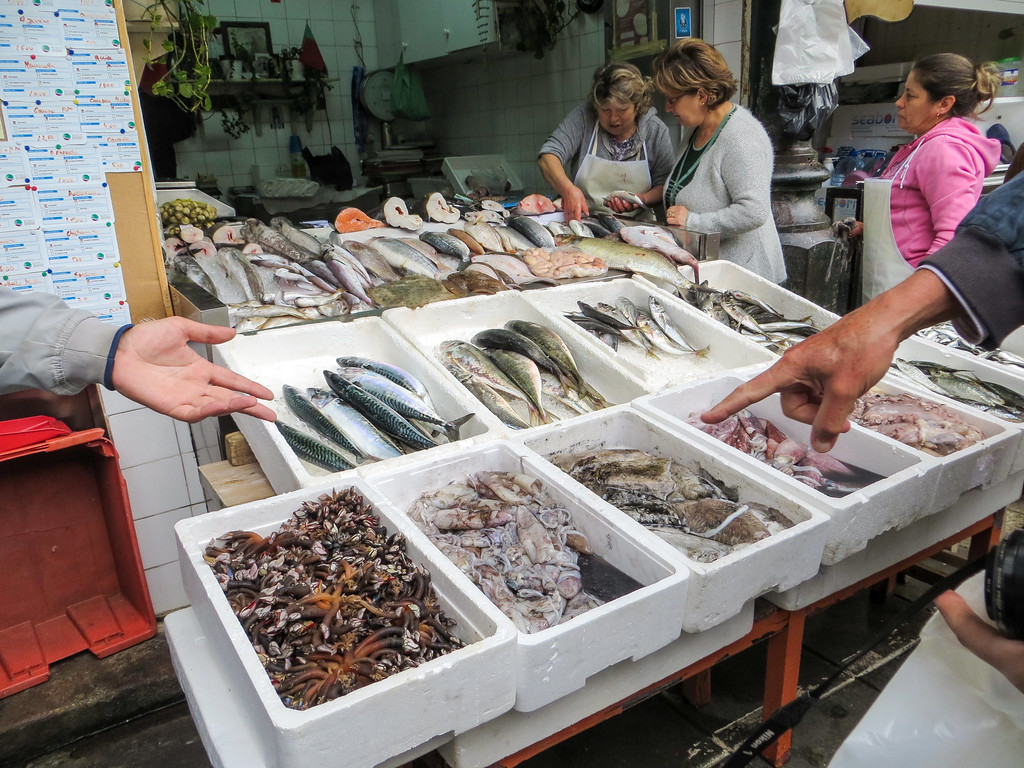 Mmmmm, the second city of Portugal had delicious food available for tourists.

As for me, I wanted to eat a lot in Porto to compare the specialities of the north and south. Overall, the food in Porto was fresh and spectacular. On my walking tour, we stopped at the Bolhão Market. We learned that the market was declared a site of public interest due to its history, existing since the late 1800s. The scent of recently caught fish hung in the air as we browsed the stalls and nibbled on random treats.

Later in the day, four social German travelers and myself returned to the market for lunch. I chowed down on Francesinha, a sandwich originally from Porto. Does ham, sausage, linguiça, and melted cheese on bread with a side of french fries appeal to you? It did to me. And every bite was delicious. Diets, be damned!

For more information about Bolhão Market, check out Lauren Aloise’s post over at Spanish Sabores. 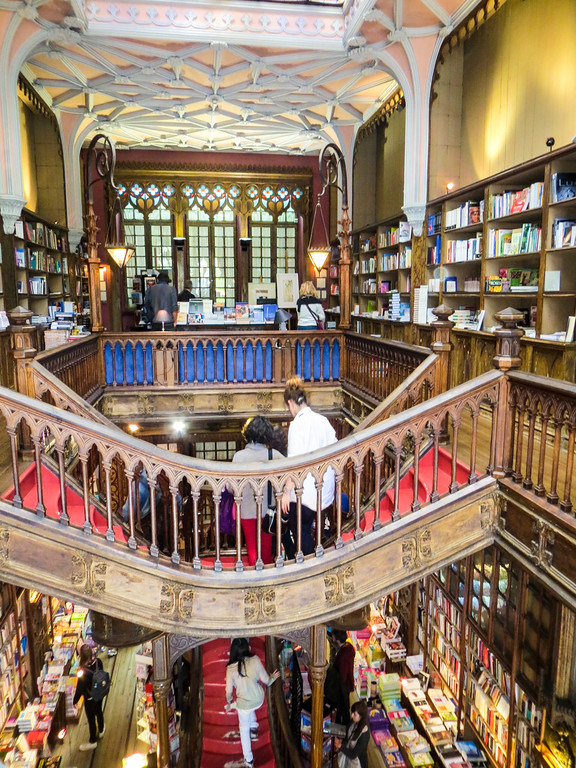 Look at this bookstore. Look at it! Need I say more?

Livraria Lello & Irmao is one of the most beautiful bookstores in the world and worth your time.

It’s even said that J.K. Rowling herself was inspired by this lovely bookstore when she resided in Porto. I’m included to agree. Any fan of Harry Potter can see the resemblance between Livraria Lello & Irmao, and the spectacular library in the magical school of Hogwarts.

Not going to lie: I want to revisit Porto just because of Livraria Lello & Irmao. It’s popular with tourists yet I want to try to make a purchase on my next visit. Supporting independent bookstores is very important to me. My trip to Porto reconfirmed it.

Needless to say, Livraria Lello & Irmao was a big surprise in the second city of Portugal. I had no clue such a wonderful bookish paradise existed. It’s the ultimate literary gem. 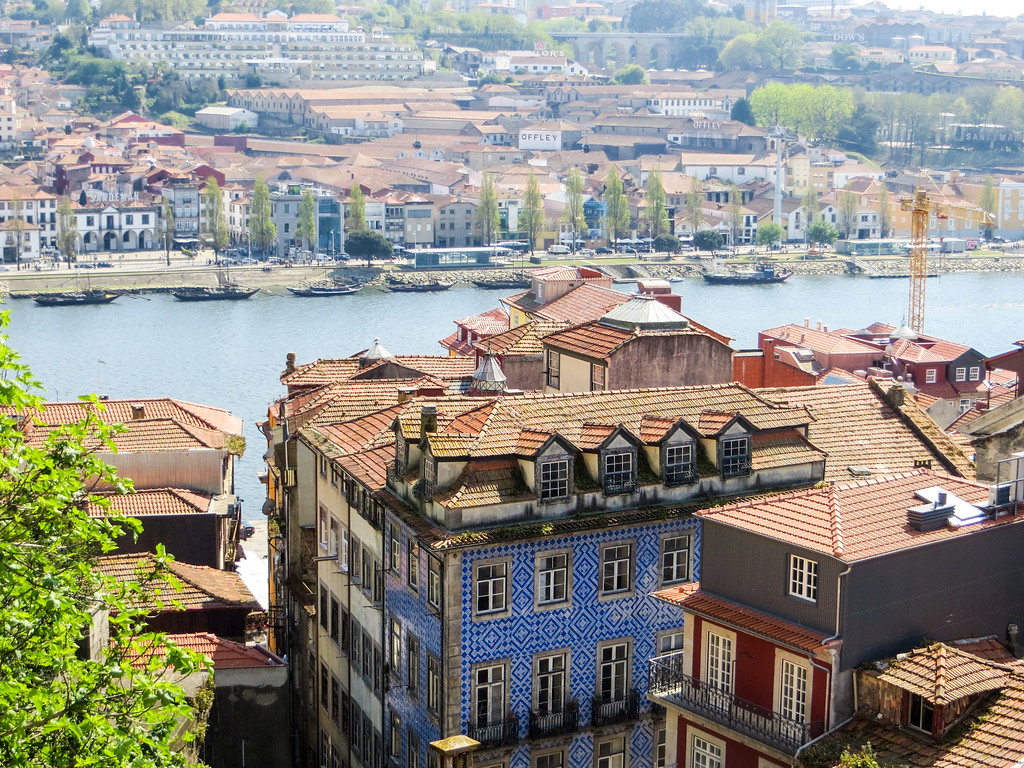 Have you ever visited the second city of Portugal? What were your impressions? Is Porto or Portugal on your bucket list? Share all your thoughts in the comments.

2 thoughts on “Porto: My Experience Visiting the Second City of Portugal”