Are you planning on taking a Potsdam day trip from Berlin? Then you’ve come to the right post, my friend. I highly recommend going out to Potsdam if you have extra time scheduled in Berlin. It’s a delightful place packed with tons of cool sites and history. Potsdam is very popular for a reason and you don’t want to miss it.

As for me, when I went to Berlin, I chose to do the Potsdam Tour with Sandemans New Europe Tours. I was a relatively new traveler and wasn’t sure what to see and do, so I decided going with the comfort of a guided tour was for me. On my trip, I had a great time and learned a lot of cool facts from the enthusiastic tour guide. As a solo traveler, taking the guided tour was a lovely and time efficient way to see Potsdam.

However, Potsdam is very simple to do on your own especially as a day trip from Berlin. You shouldn’t have at problems at all. 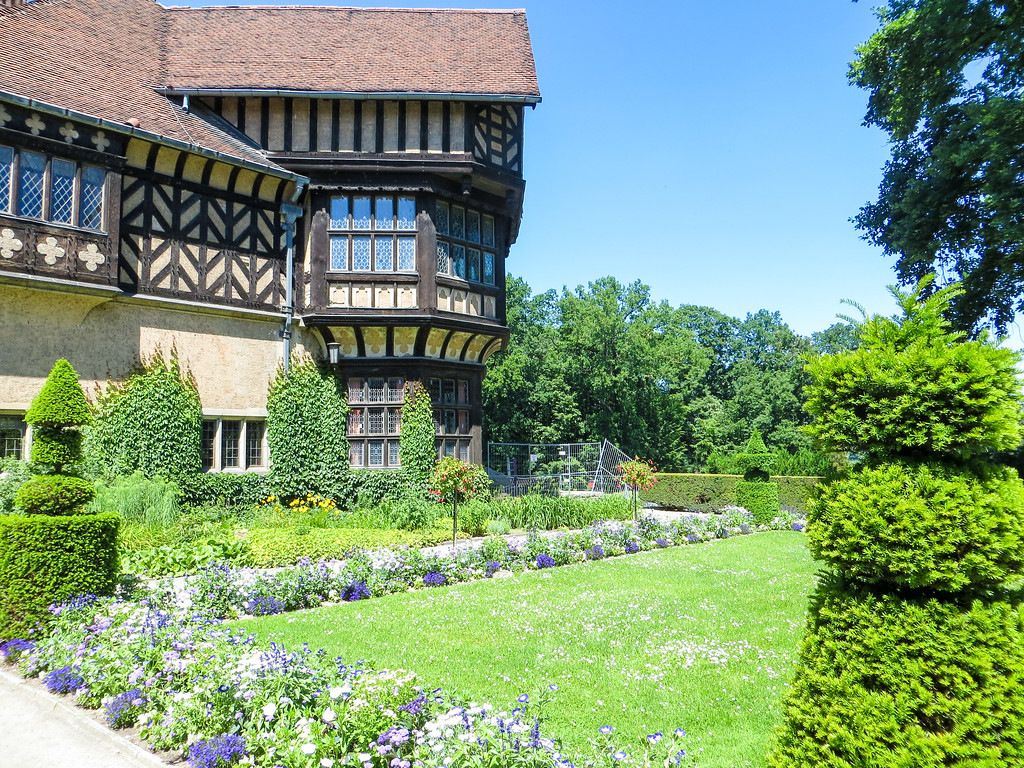 Why Should I Take a Potsdam Day Trip from Berlin?

Erm, why wouldn’t you? Potsdam is a very significant town in Germany’s extensive history.

First of all, the Palaces and Parks of Potsdam and Berlin (Sanssouci) are included among the many renowned UNESCO World Heritage Sites. If you’re a traveler who hopes to see all the UNESCO sites, then Potsdam is absolutely for you. At the palace, you will learn all about Frederick the Great of Prussia, who was one of Germany’s greatest rulers (hence “The Great!”).

Not interested in palaces? Recent history buffs will also have a deep appreciation for Potsdam. Believe it or not, Potsdam was very important for spies during the tumultuous days of West and East Germany.

Additionally, many consider the Potsdam Conference, which took place after World War II, to be the official starting point of the Cold War. Over all, Potsdam is a fascinating place from a historical perspective and not to be missed.

Finally Potsdam allows you to take a break from the noise and congestion of the big city (Berlin) to escape to a more peaceful place. On my trip, Berlin experienced a freak heatwave and escaping the “concrete jungle” felt amazing in more ways than one. Potsdam is home to several parks. The summer months bring sailers and sunbathers alike, all ready to enjoy Potsdam’s natural beauty. Flowers bloom on every corner. Find a small beer garden and get back to nature in a way that’s impossible in Berlin itself.

Have I convinced you yet? Yes? Good. Let’s go.

How do I Take the Train from Berlin to Potsdam?

The train from Berlin to Potsdam is simple and convenient. Train is also the fastest way to Potsdam compared to a taxi ride or bus. I honestly wouldn’t venture out to this town using any other mode of transportation. Germany’s trains are very high quality. Take advantage of them.

As for directions, when you’re in Berlin, you want to take the RE1 train direct to Potsdam. You can get these trains at Berlin Central Station, which is connected to Berlin’s major subway system, making it reachable from any part of Berlin. These trains are clean, timely, and air conditioned, creating a pleasant ride for passengers. 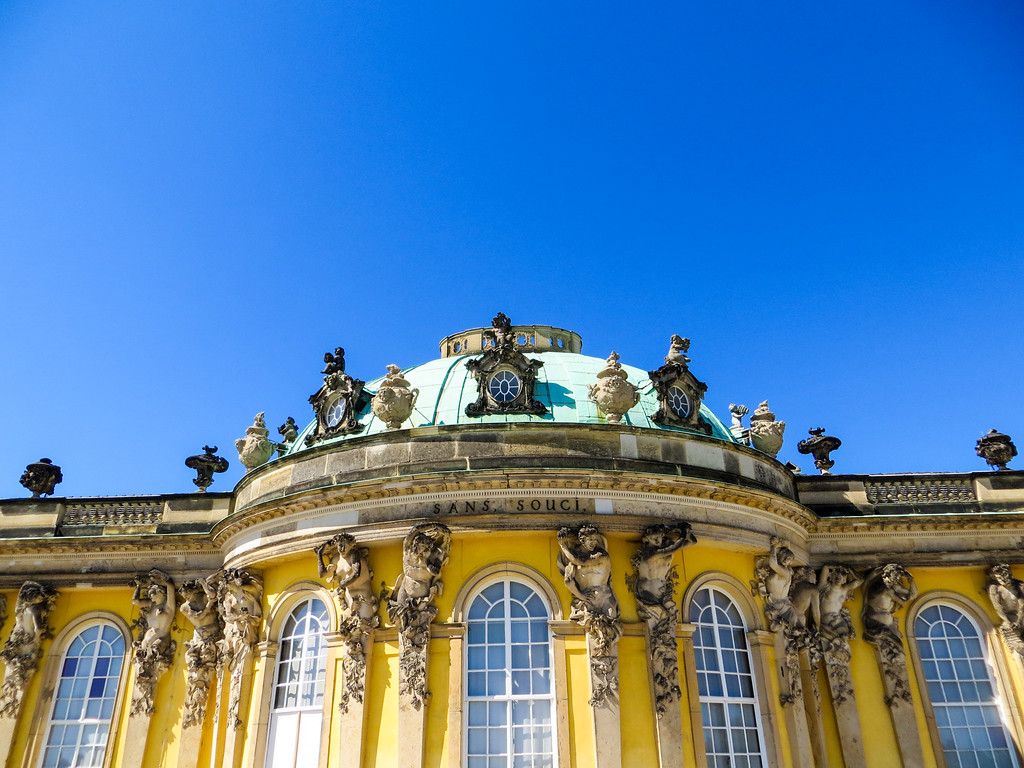 Once you’re on board the RE1 train, then it’s not a long ride at all to the beautiful town of Potsdam. How long of a journey? Less than an hour! Actually, it only takes roughly 35 minutes to reach Potsdam, which is why it’s such a popular and easy day trip from Berlin. Not much fuss.

Another piece of advice is don’t disembark at Potsdam Hbf! This station is much further from most of the big attractions. Instead wait on the train and get off at the next stop Charlottenhof, which is much closer to the palaces, only a ten minute walk or so.

One last word of warning about taking the train from Berlin to Potsdam. Make sure to validate all tickets prior to boarding the RE1 train. Plainclothes cops do sometimes check tickets and the fine is steep for not validating a ticket ahead of time. They don’t take excuses from tourists either. Just be careful.

Places to Visit in Potsdam

You won’t feel remotely bored on a day trip to Potsdam. The capital of Brandenburg has an abundance of places available for you to to visit in one day. To be fair, I don’t think it’s possible to see all of Potsdam in a single afternoon, but you still can get a strong feel of the place and plan to return again in the future.

Below, I listed some of the coolest places I saw in Potsdam. Prioritize them according to your own interests. Time is limited on a day trip, after all. Go in with a plan already formulated to maximize your visit in Potsdam.

Bring along your Lonely Planet Guidebook of Germany. 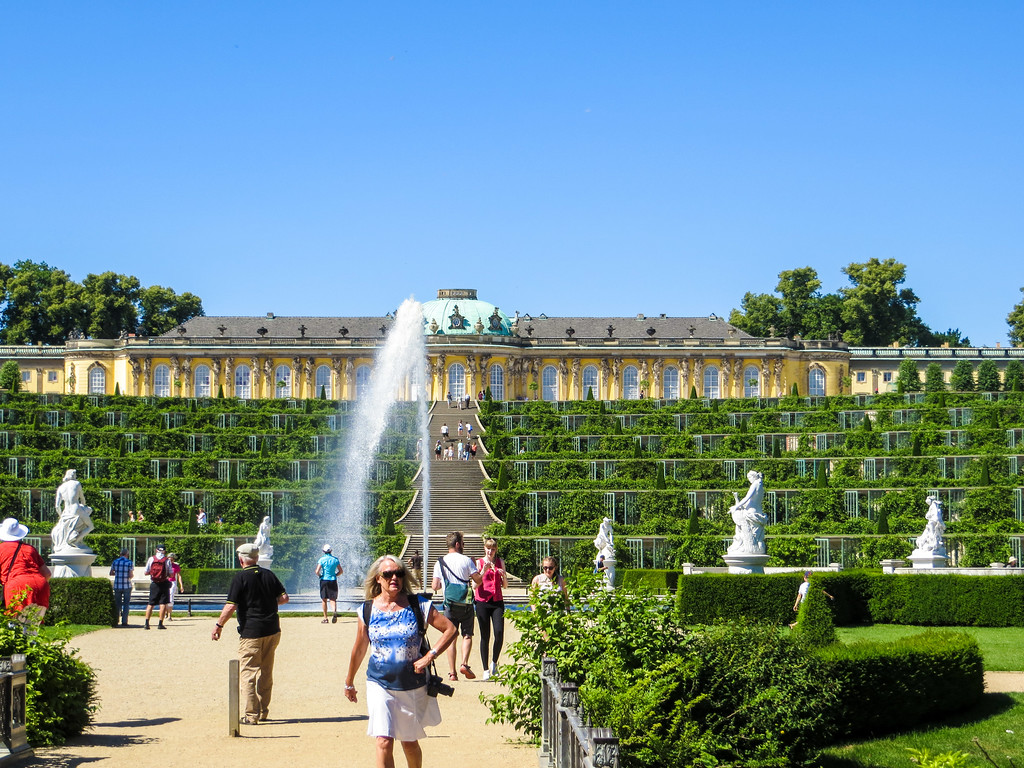 Sanssouci Palace and its extensive gorgeous park are on the UNESCO World Heritage Sites list. Frederick the Great of Prussia built his Sanssouci in 1745 –1747. This magnificent summer retreat was Frederick’s sanctuary where he spent quality time with his beloved greyhounds.

Audioguides are available when you take a tour of Sanssouci Palace, making it easy to learn the summer retreat’s history without paying a heavy price for a private guide to take you through palace.

Make sure to explore the grounds, too. You will discover Frederick II’s tomb on the castle hill. He wanted to be buried near his dogs so he chose this scenic place for his eternal rest. Interestingly, potatoes are placed on his grave. He introduced the great crop (potatoes) to Germany so people pay their respects with potatoes rather than flowers.

Keep in mind that Sanssouci Palace is closed on Mondays. Therefore plan your day trip to Potsdam from Berlin for another day of the week. It would be a pity to miss such a spectacular place. 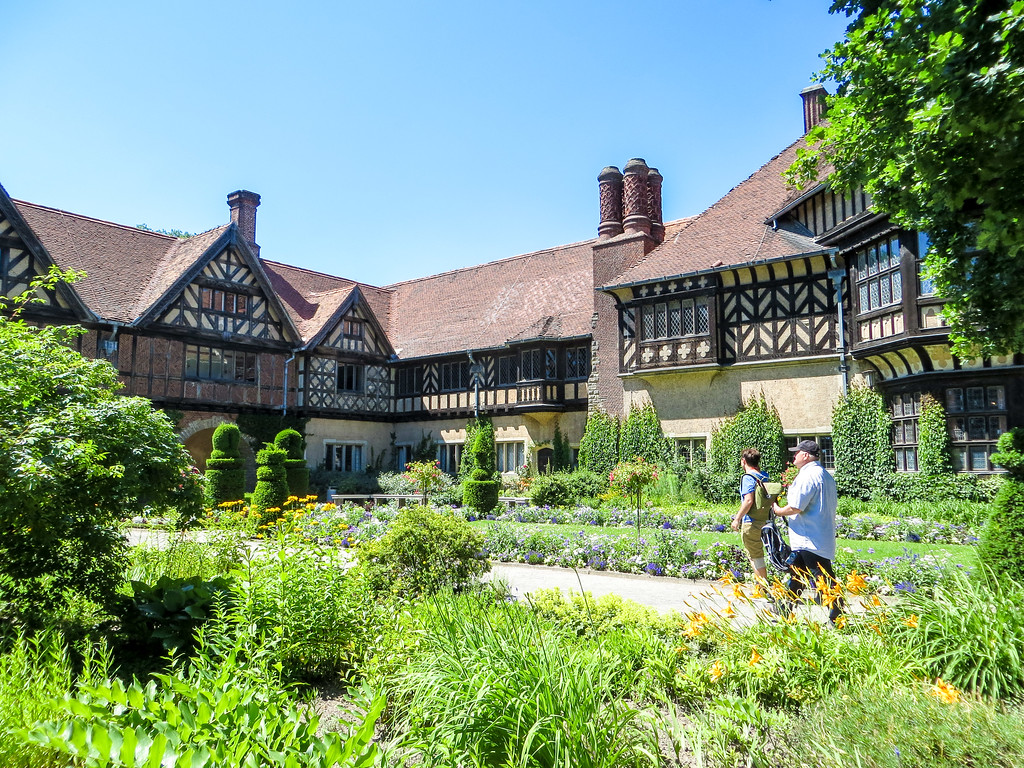 Schloss Cecilienhof is another palace located in Potsdam. Built in the early 1900s, this palace was designed in the English Tudor style for Crown Prince William and his wife Cecilie von Mecklenburg-Schwerin. More importantly, Cecilienhof was the site of the 1945 Potsdam Conference. Stalin, Churchill, and Truman all gathered here to determine how to establish a postwar treaty as well as establish order after Germany’s unconditional surrender in World War II.

Shortly after the Potsdam Conference, Japan was bombed and the Eastern Europe countries were converted into Soviet satellite states. Needless to say, this meeting changed the course of history forever. Crazy, huh?

Cecilienhof is now a museum and is located inside Potsdam’s gorgeous park Neuen Garten or New Garden.

Learn all about the Potsdam Conference.

3. The Protestant Church of Peace

Sanssouci’s grounds don’t only include the spectacular summer palace. There are many other sites for you to check out such as the Protestant Church of Peace.

This church is gorgeously situated on the extensive palace grounds of Sanssouci Park. The Protestant Church of Peace was commissioned in 1845, and the architecture reminds me of a church constructed at the height of the Renaissance in Venice.

Furthermore, the Protestant Church of Peace is a delightful and quiet sanctuary for when you need a break from walking around Sanssouci’s grounds. It’s not to be missed.

This monument, similar to a Roman triumphal arch, is located in the center of Potsdam. It was constructed in 1770 after Prussia won a seven years’ war. The square surrounding Brandenburg Gate is a lovely place to walk and take some photos before checking out Potsdam’s restaurants and shops.

Learn a few phrases of German for your visit.

5. Glienicke Bridge (or “The Bridge of Spies”)

The Glienicke Bridge is a bridge that extends across the Havel River. On the river, particularly in the summer months, many sailers enjoy the deep blue water. However the immediate area surrounding Glienicke Bridge wasn’t always such a tranquil oasis for locals. In fact, it was downright tense and dangerous.

So why’s it called “The Bridge of Spies?” Well. During the height of the Cold War, Glienicke Bridge was a restricted border that served as a crossing between territories associated with both the American military and the Eastern Bloc. Therefore this bridge was a prime location and used to exchange Soviet and American spies and other prisoners.

Unsurprisingly, Glienicke Bridge is the star of the Tom Hanks’s film Bridge of Spies. Cold War history buffs have to come here. 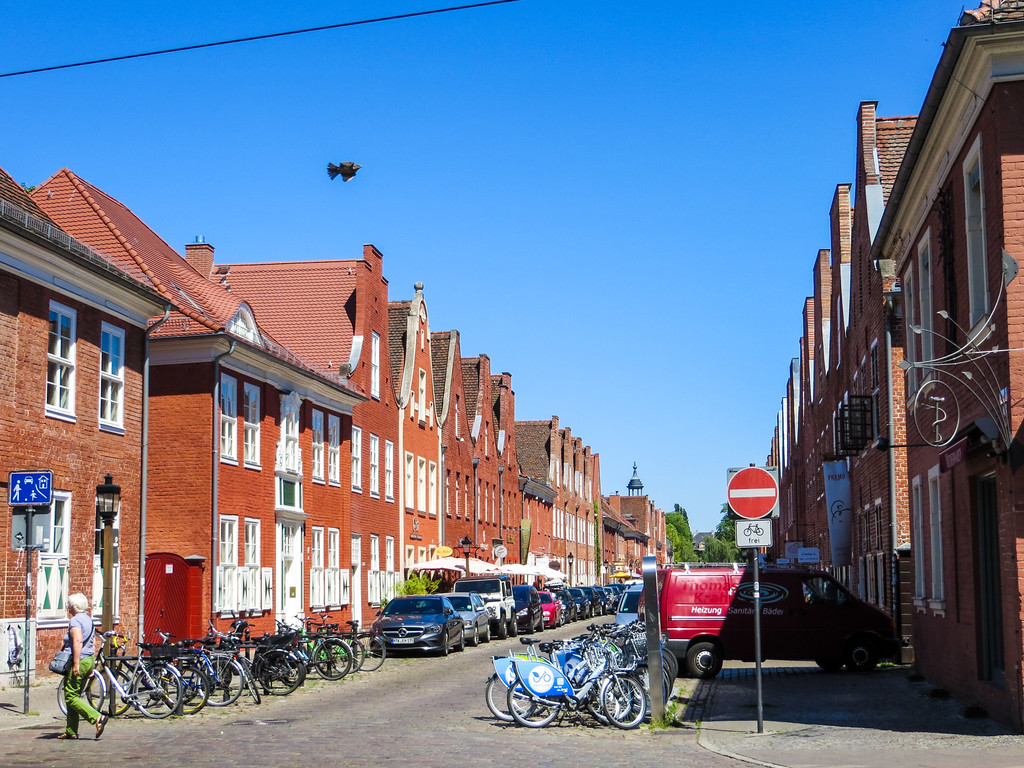 Hollandisches Viertel or the Dutch Quarter is located in Potsdam’s center. This part of Potsdam has 169 really cool red Dutch buildings. I felt like I transported to the Netherlands when I came here, haha.

So why all the Dutch buildings? During the extension of Potsdam, Frederick William I wanted his Dutch craftsmen to feel at home in Germany. Which led to the Hollandisches Viertel.

This area also has many wonderful cafes for you to grab coffee and a meal.

Should I Spend the Night in Potsdam Instead?

Now that I’ve covered all the cool sites I saw in Potsdam you might be wondering, “Hmmm, this is a lot of ground to cover. Maybe I’m better off spending the night in Potsdam instead.”

What’s my advice? Honestly, if you have time in your itinerary, you might choose to spend the night in Potsdam rather than take a day trip from Berlin. And that’s totally fine!

By spending the night, Potsdam becomes entirely yours in the later afternoon once all the day trippers depart for Berlin again. No more crowds. You have a variety of accommodation options to choose from, too.

However, if you have a super tight schedule, then a day trip to Potsdam should be plenty of time for you to see everything. Just prioritize ahead of your visit. And remember it’s only a 35 minute train ride from Berlin.

Book your accommodation in Potsdam. 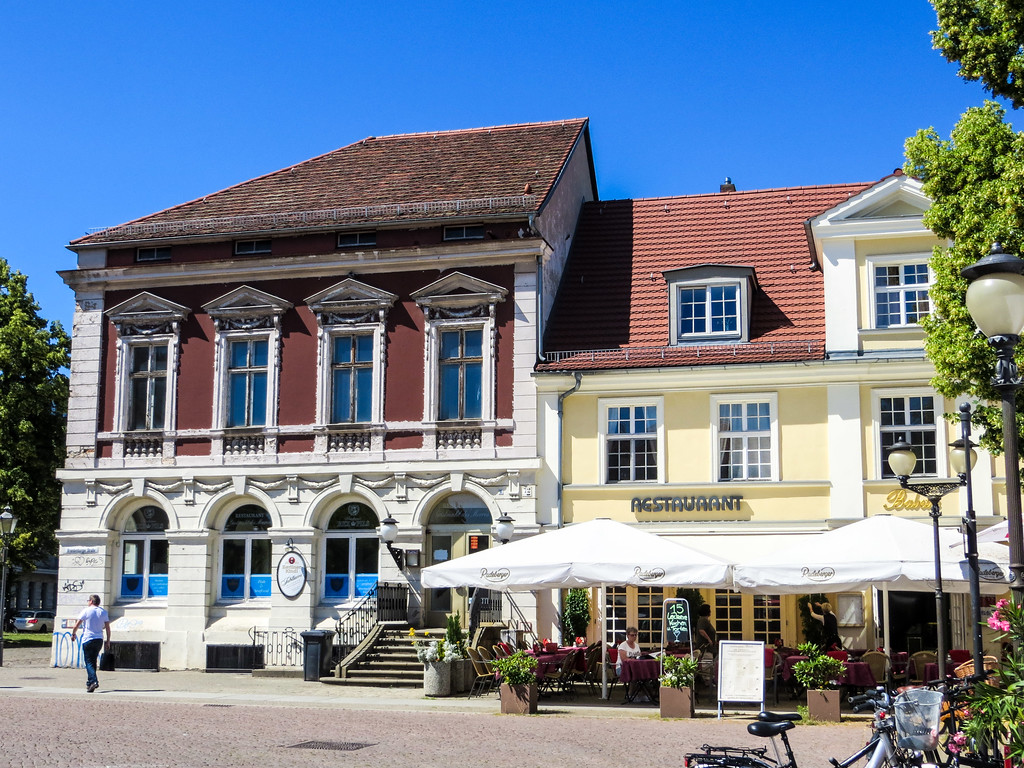 Have you ever visited Potsdam? Do you want to add a Potsdam Day Trip from Berlin to German travel itinerary? Share your thoughts in the comments.