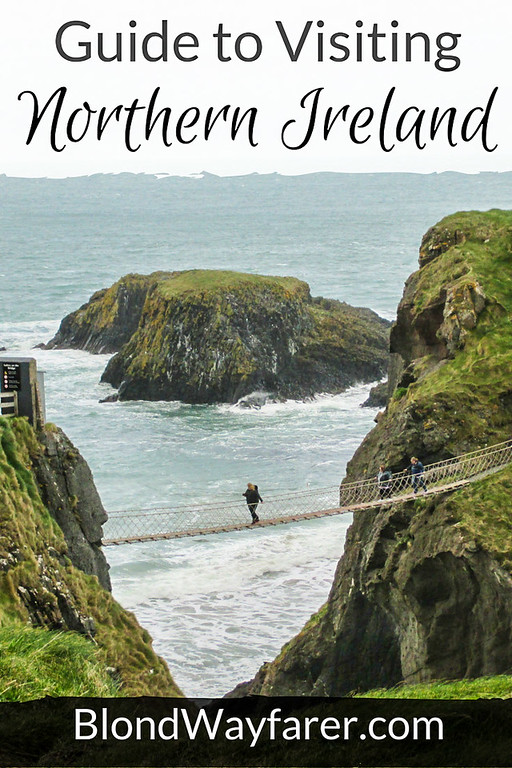 Guide to Taking a Trip to Northern Ireland

We all know Ireland (the Republic of Ireland, that is) fascinates Americans. Namely because many people trace their roots back to this country. And Ireland is so damn pretty.

Yet, for some reason, Americans also skip over Northern Ireland on their trips to the Emerald Isle. I think their avoidance has to do with the negative stigma attached to The Troubles even though the most violent years are far, far, far behind us.

I think Northern Ireland is an example of a place that’s come a very long way and emphatically isn’t limited to its past. The Good Friday Agreement, a major political development that impacted the peace progress, took place in 1998. Seventeen years ago (as of 2015).

Think about yourself. Seventeen years ago, I was an insecure eleven-year old who hated middle school, gave homework to stupid boys I crushed on, and wanted to be a pop star. I changed a lot. Why can’t destinations change too?

But I digress. Back to why you need to take a trip to Northern Ireland. 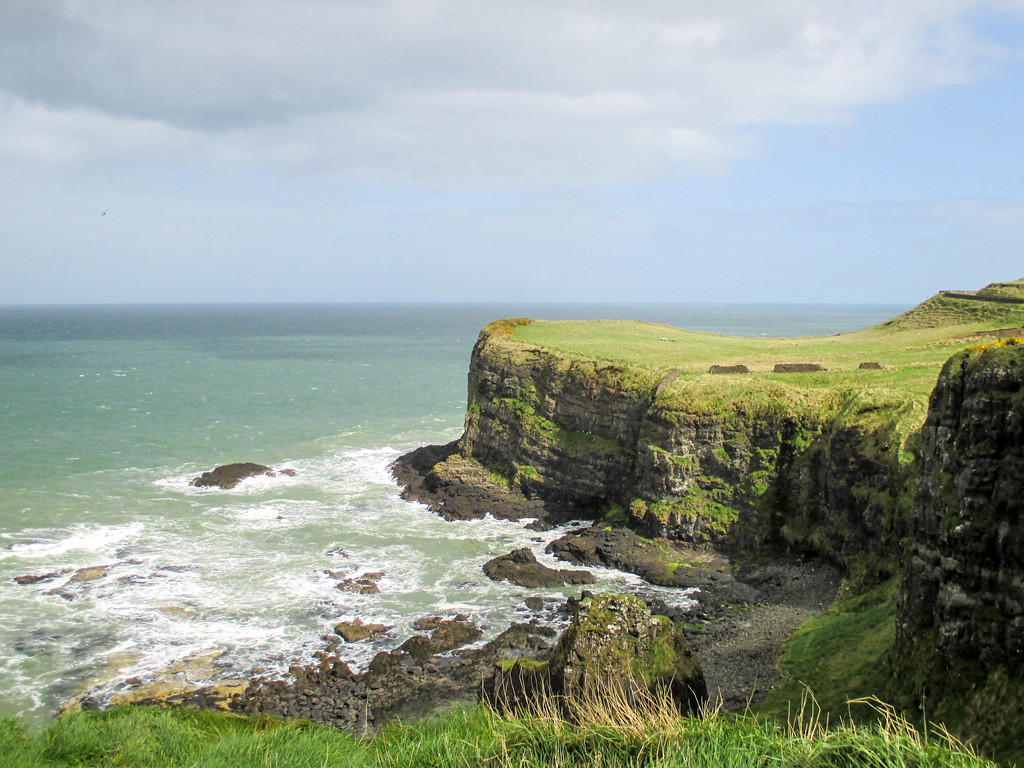 A Summary of My Trip to Northern Ireland

If you’re visiting Ireland, take the opportunity to venture north! Go, go, go, and visit Northern Ireland. I promise you won’t regret it.

Last year, I had a lovely break between two longterm substitute jobs. In true “Blond Wayfarer” fashion, I decided to take the opportunity and book a return ticket to Dublin.

My adventure in Scotland with Haggis Adventures changed my entire life. I was impulsive and hungry for more travel. So what better way to utilize my break than to join Haggis’s “sister company,” Shamrocker, for a 7 day tour around Ireland?

I selected the 7 day tour because I knew I wanted to visit Northern Ireland. Its turbulent past intrigued me, and its majestic landscape was featured in many scenes on HBO’s Game of Thrones series.

Oh, this awesome place didn’t disappoint me. I went in April which I think is one of the best times to visit Northern Ireland. Crowds were low, temperatures moderate, and plane tickets still pretty damn cheap. Furthermore, Shamrocker made Northern Ireland shine. Be sure to check out my post on what to expect on a Shamrocker tour for more information.

Where did I go and love? Read on!

1. Go to the Antrim Coast

The scenery looks like it popped out of an epic fantasy novel. Seriously, my camera battery was ready to kill me because I took so many damn pictures. And if you LOVE Game of Thrones, check out this incredible road trip. YES PLEASE!

Not only is the landscape truly epic, there are many quirky sites for you to visit on your journey. Here are two of them, not including Giant’s Causeway. 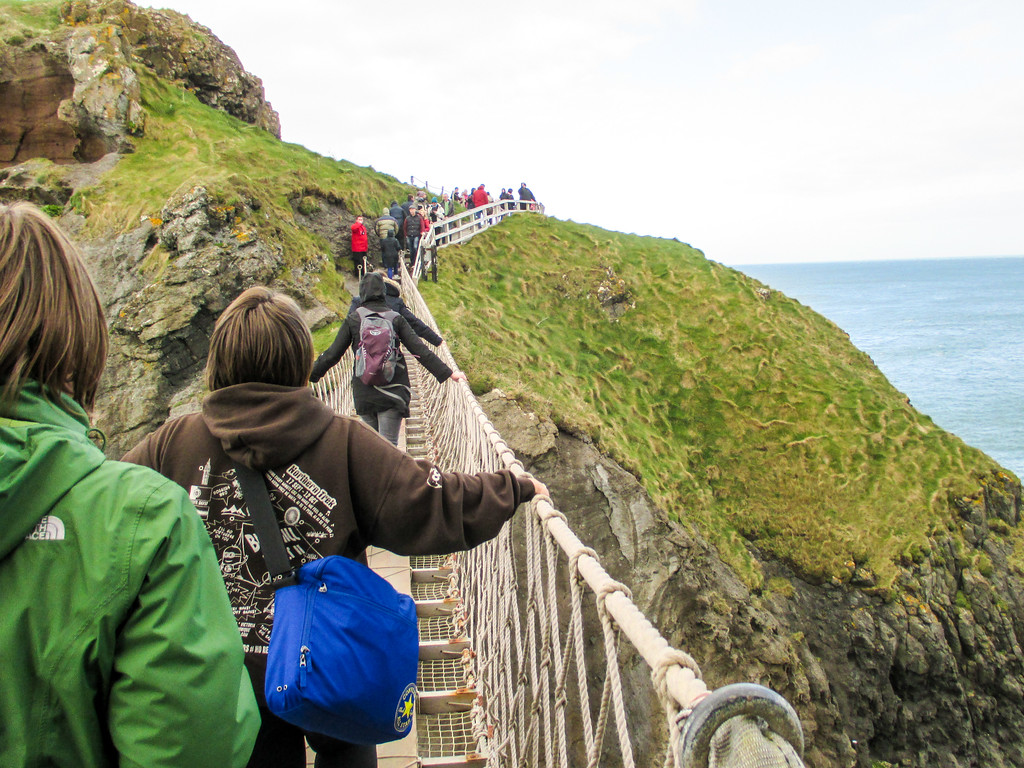 Oh man. So much to say about the Carrick-a-Rede rope bridge.

This bridge is suspended 100 ft. (30 m.) into the air, and connects the main land to a rocky island. It was originally built by fishermen, but now it’s a fun tourist attraction!

After we dropped our bags at the hostel, the Shamrocker gang and I decided to brave our way across this crazy bridge. The wind was especially high, and stupid ol’ me didn’t have a ponytail tie so my blond hair smacked me in the face the entire time.

Before crossing the bridge, we asked the gentleman running the site if the winds made it unsafe to trek over to the other side He simply laughed in response.

Uhhhhhh. It was one of those moments I was grateful to have travel insurance, haha.

Crossing the bridge wasn’t easy. A woman in front of us freaked out and refused to move, blocking our path halfway across the bridge, and I thought the wind was going to blow me into the water, but my god, was it fun and worth it! 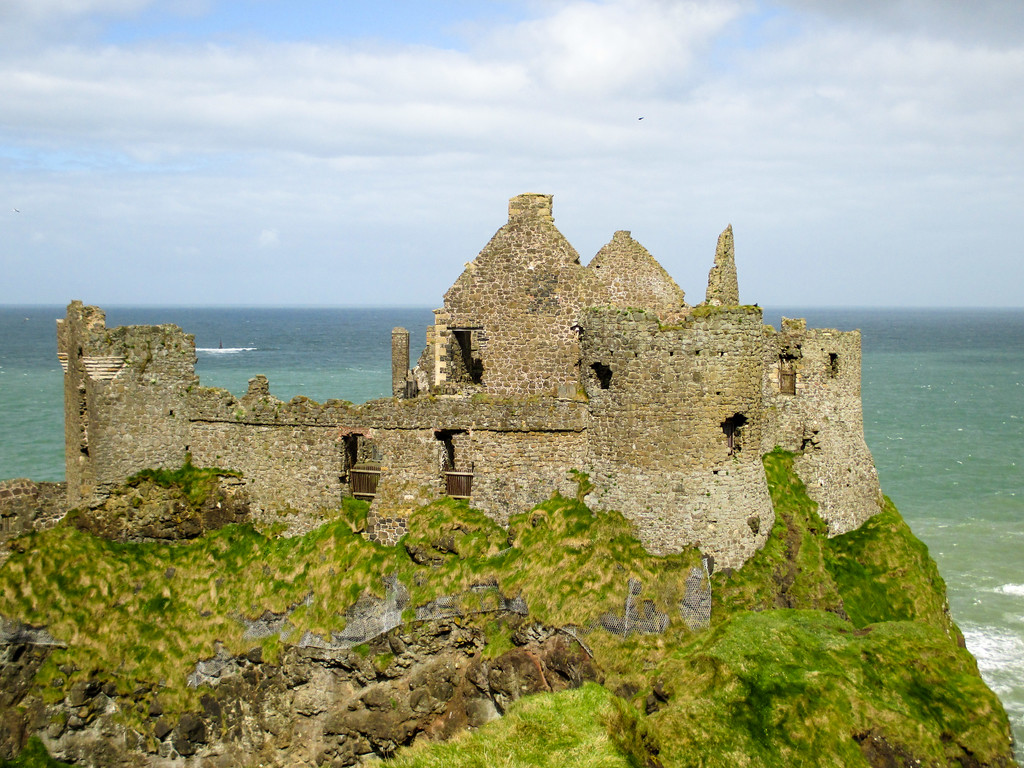 During our drive on the Antrim Coast, we also heard the story behind Dunluce Castle.

The castle is still owned by the Scottish McDonnell family (clan) who originally came over in the 16th century to consolidate territories. Our guide told us that apparently one evening the castle’s kitchen, along with its poor staff, fell into the sea causing both the lord and his wife to pack their bags and leave.

Totally a scary mental image, but the castle’s dramatic location is beautiful and would definitely belong on Game of Thrones.

So far, it’s one of my favorite castles in all of Europe!

Book accommodation on the Antrim Coast. 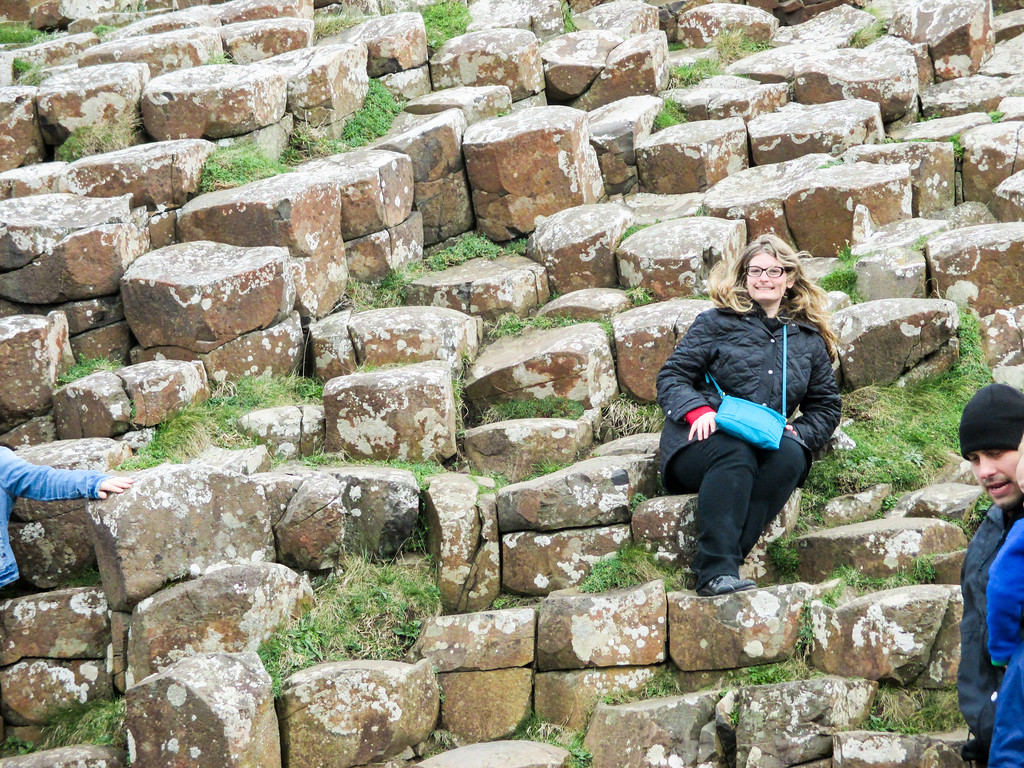 You ought to take a trip to Northern Ireland for The Giant’s Causeway alone. So. Awesome.

The Giant’s Causeway is without a doubt Northern Ireland’s most famous site. I mean, it IS a UNESCO World Heritage Site.

I won’t talk tootoo much about this place since it’s so famous and popular. All you need to know is that Giant’s Causeway is easily recognizable from its cool hexagon shapes. Seriously, can you believe nature created those rocky formations? Wild!

But rumor has it that giants constructed this geological wonder.

When you visit Giant’s Causeway, a handy audio guide will point out all the extra unique spots for you such as the Organ Pipes and the Wishing Chair.

OH, and a word of warning: be careful climbing these funky rocks if you’re a major klutz like yours truly! I can’t even begin to tell you how many times I nearly took a spill because a) the rocks were wet and b) the strong sea wind wanted to kill me.

Avoid my mistake and bring sturdy walking shoes for your visit! Giant’s Causeway has many unforgettable hikes nearby you don’t want to miss. 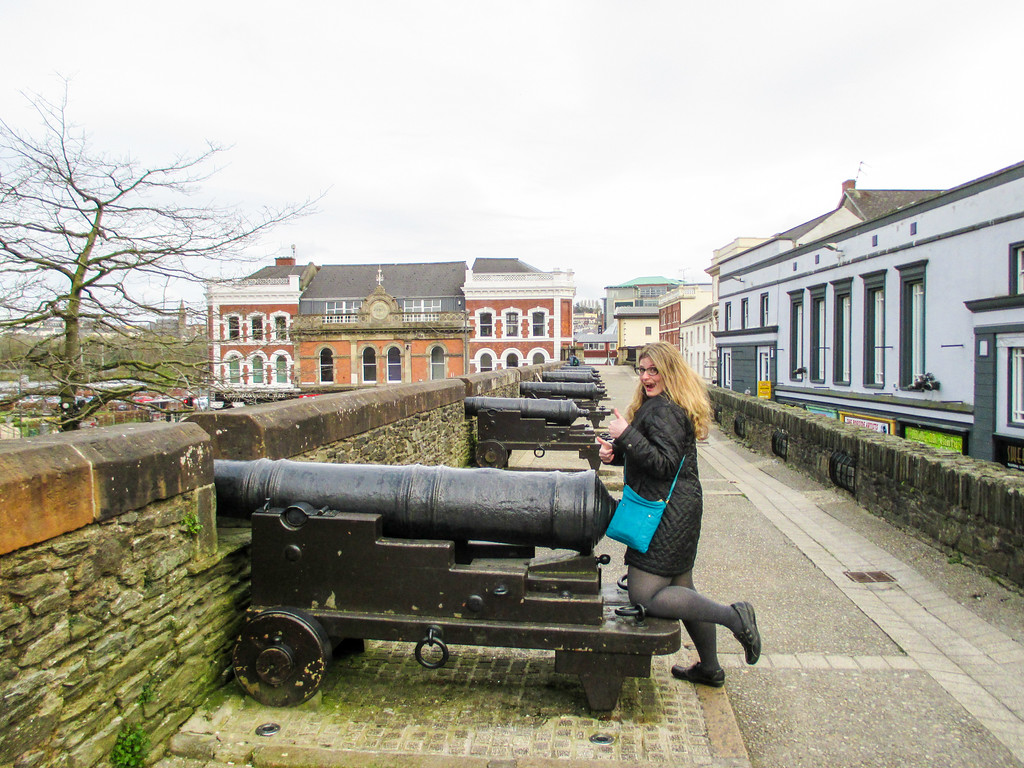 3. Learn About the Troubles in Derry

Derry touched my damn heart. I won’t go into too many details about Martin McCrossan’s Award Winning City Tours because my own tour was so incredible that it deserves it’s own post. If you’re in Derry, you need to do that walking tour. I don’t care if you don’t like walking tours or already read about the city’s history yourself. GO. ON. HIS. TOUR.

Anyway, I had a blast walking around this cool city and taking silly pictures.

I crossed the Peace Bridge, stumbled upon a really strange American Circus (uh, yeah), posed on the city walls, and experienced some pretty fun nightlife.

Derry was a heated city at the height of the Troubles. It was the scene of the Battle of the Bogside and Bloody Sunday. Derry’s history is everywhere; however, the city has taken leaps and bounds to move past its troubled reputation. Derry was even recognized as a UK City of Culture in 2013.

Also, it’s important to note that there’s a dispute regarding the city’s name. I referred to the city as “Derry,” and didn’t come across any problems though I suppose it depends on who you’re talking to.

Book your accommodation in Derry.

Honestly, I need to return to Belfast, the capital city of Northern Ireland. We only spent an afternoon which is obviously not enough time to truly experience a city. I feel like you need at least a weekend in Belfast when you take a trip to Northern Ireland.

After all, I’m still pressed about not having a chance to see the Titanic Exhibit, which takes an entire afternoon in and of itself.

However the Black Cab Tour made up for the lack of Titanic. We visited murals in both Republican/Nationalist and Unionist/Loyalist neighborhoods. The guides made it clear to everyone that the Troubles were NOT religious conflicts, but a political ones. Each mural had a story.

Most memorable to me, however, were the peace lines which separated different neighborhoods in order to, you guessed it, keep the peace.

Now I liked Dublin a lot, but despite its rough history, I felt Belfast had a lot of untapped soul and potential. The atmosphere was real and raw, and the city’s people were very eager to talk to me.

Since I was in Belfast on a weekend, I had a chance to visit the city’s famous St. George’s Market. Goodness, you could legitimately find anything you wanted at this place! Homemade food and independent clothing stalls abound! If you’re a fan of lively markets, then I would absolutely recommend this spot.

Lastly, I want to emphasize that I never, ever, ever felt unsafe in Northern Ireland. I’ve been more uneasy at night in New Jersey than I did clubbing in Derry or walking back from a pub in a small Antrim town.

Sure, there are news stories about troublemakers, but don’t let those stories deter you from a visit. Personally, I feel like no visit to Ireland is complete without a stop in the north. 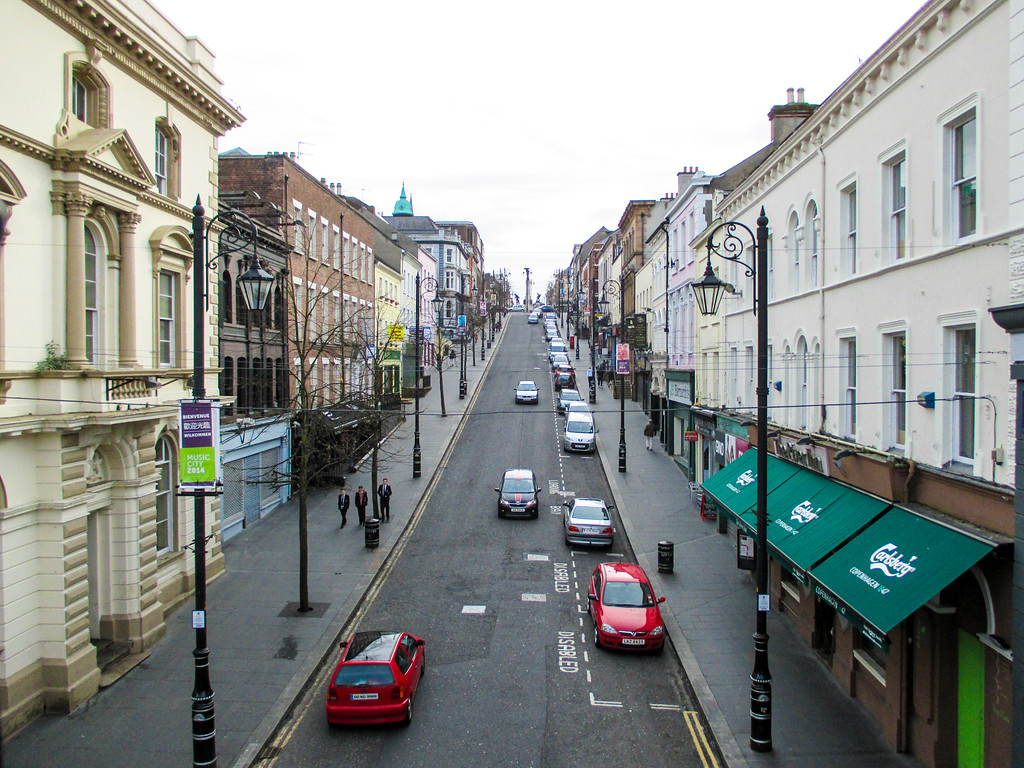 Have you ever visited Northern Ireland? What other places have you been to that have a “lackluster reputation” in your own country?

Note: Shamrockers did not sponsor anything! And some links are affiliate-based, yo.